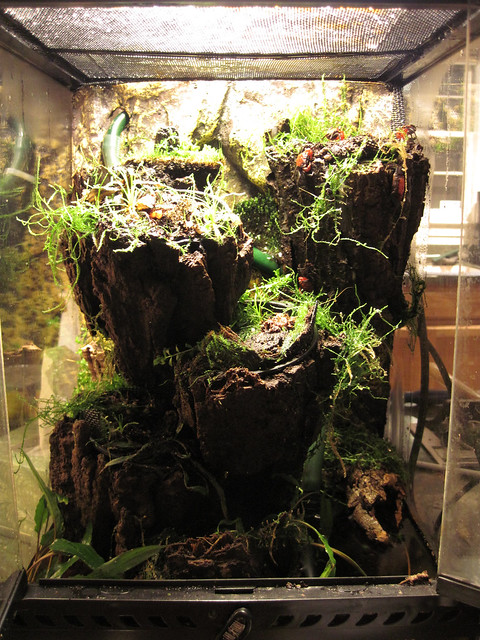 This is my latest aquarium project. It’s actually a paludarium, which basically just means that it’s a terrarium with both land and water area. Because the red devil crabs (Geosesarma spp.) I wanted to keep are primarily terrestrial, I needed to have a lot more land and hidey holes than I needed water. But they do need humidity and moisture and I didn’t want to invest in an expensive fogger like some people do for reptiles and frogs. So I wanted to have a small water area that I could pipe to a spray bar and keep the entirely thing damp.

To start, I picked up an Exo Terra terrarium. I like how it opened both in the front and back. The foot print was small enough that I would be able to find a good place in the house. I also liked the foam background it came with since I figured that would be easy enough to pipe the waterworks through. After this had been up and running for a while, I discovered two things I didn’t like about it. First, it leaks. There’s no good indication of how high to fill the water without trial and error. It’s a slow drip, but it’s a good thing that I’ve got a drip plate underneath it on the stand because it can be a substantial amount of water if I’m not careful. Second, because I wanted to keep the humidity in and not have to worry about topping it up every day, I placed pieces of Plexiglass on top of the screen top. It turns out that even though it’s intended to be used for damp environments, the screen wasn’t rust proof! It started rusting and then disintegrating very quickly. I ended up having to pull all of the screen out of the top and rescreen it with some vinyl coated screen I had bought for our screen doors. Not only was the screen held in with cheap spline, but then the screen and spline was glued into place. It took me ages to get it all removed. I feel very lucky I didn’t end up breaking the top’s plastic frame. However, once I had the screen replaced, the Plexiglass works well to maintain the humidity.

For the waterworks, I’ve got a cheap little aquarium pump to move the water from the bottom to the spray bar. I had a really hard time finding something that wasn’t giant and would work well in the low water level. I found this little one at Petco and only spent $20 on it. However, because I only spent $20 on it, I also don’t expect it to last very long. As another minor grumble about the terrarium, the holes cut into top to pass wires through were cut so that the opening of the hole was smaller than the hole itself. So while the cord for the pump would fit in the hole, it wouldn’t actually get through the opening. And when I tried to press it, the plastic was sharp enough that it started cutting the plastic coating on the cord! That’s not good. I ended up using a razor to cut the opening larger and that solved the problem. One of my design priorities was making sure that I could easily replace things as needed. So I didn’t do anything like glue the background into place like I’ve seen other builds of this type do. The hoses and spray bar are spare Eheim canister filter parts. I did end up having to cut the spray bar down in order to fit it in where I wanted it, but that was fine. I also used plastic zip ties to hold hoses in place against the foam background. Cheap, easy to use and replace, and I don’t have to worry about them corroding.

One very specific piece of hardware I wanted to mention was the heater. I got a Cobalt Aquatics 25 Watt Neo-Therm Heater with Plastic LED for this tank. You can find a lot of betta heaters out there for small volumes of water (and all told this tank holds maybe 2 gallons tops) but most of them just raise the temperature 5°F with the assumption that the tank is going to be somewhere with a steady room temperature of about 75°F. That is not the case in my house so that would lead to a lot of temperature fluctuation and possible overheating. This heater, however, comes with a built-in thermostat. It tells you what your set temp is and what the water temp is, if it’s below or above the set temp. It’s very neat and thus far I’ve been really happy with it. In fact, I really ought to pick one up for my office shrimp tank since my office is quite variable in temp and I just have a static betta heater in there right now. I also like that the heater is fully black except for the LEDs so it’s hard to see in the tank.

Finally, the lamp on the tank is a cheap hanging spotlight that I’ve had for over a decade on an Exo Terra lamp holder. I like how simple the lamp holder was and adjustable. I initially started out with an incandescent bulb in it, but quickly discovered just how much heat the bulb put off when it quickly burned and killed the plants I had highest up in the tank. Oops. Now I’ve got a full-spectrum LED equivalent of a 40W bulb in there. It doesn’t put of nearly as much heat and seems to keep the plants happy.

So that’s the hardware. Now for the hardscape. I used plastic hydroponics cups and PVC pipe as the bones of the hardscape. Again, I wanted something that I could move in and out easily in case of needing to do mechanical repair. Everything is held together again with plastic zip ties. It’s more mobile than something glued together would be and probably a bit more unstable than some people would like in their tank. I wanted the flexibility more than anything. Then I covered everything with bark glued on with silicone. Since these are rainforest crabs, I wanted them to have “trees” to hide in. Also having the texture gives them more things they can climb. At the time I was setting this up, my local fish store didn’t have any cork bark in stock for ages. I ended up heading out to the back woods and picking up bark pieces out of the driftwood piles left by our local creek’s floods. This lead to some really interesting mushrooms and fungi growing when I got water and heat running in the tank. There’s also some tiny insects that may have come with the bark that are too small for the crabs to be interested in eating, it seems. They do act as a decent clean up crew right now since there’s not snails or similar scavengers in the paludarium. Since then I’ve picked up some cork in case I need to replace things in the future. The wild bark is holding up okay, but I suspect it may break down faster than cork would over the long term. Also, it turns out, silicone doesn’t hold things together particularly well once it gets wet. I’ve had a couple of pieces of bark come off the cups since I started running the tank a few months ago. They’re thankfully in the back of things and are quickly being covered in moss. The cups’ mesh would have let too much of the peat/soil/sand substrate out so they’re lined with the same vinyl screen screen I used on the lid. I wanted to keep the drainage without having too much substrate leak out. This seems to have worked pretty well. The places where it came up past the top of the cup have also become great places for moss to grow.

Finally, the substrate on the floor is just plain black sand. I figured that there would be a decent amount of organic material washing out of the cups as things settled so I didn’t put dirt in the bottom of the tank like I do with almost all of my other planted aquariums. This might end up working against my plans of having aquatic plants on the bottom in the long run, but you can’t really see much down there anyway with the cups taking up so much of the tank.

It’s currently planted with java moss, cryptocorynes (C. wendtii, I think), and some Cape sundews (Drosera capensi). I did have a Nepenthes pitcher plant in there, but it was unfortunately one of the plants that ended up cooked by the incandescent bulb. I also tried to get some baby tears (Hemianthus micranthemoides) going, but I don’t know if it just didn’t like conditions or what, but it’s mostly all disappeared since the picture at the top was taken. The crabs do dig, move things around a bit, and possibly eat plants, so the only sundew that seems to be hanging on is one that hangs off the top of a cup. The java moss is covering everything quite nicely. I planted the crypts in the water with a bunch of their leaves emersed. I hoped that since a lot of the aquarium plants you buy are farmed emersed that the crypts would keep their leaves but thus far they’ve died off to below the water line. Perhaps as they grow they’ll start putting out leaves above the water line. I have some bladderworts on order to try out in this tank. I wanted some more carnivorous plants and decided bladderworts would be something different to try. I have Utricularia longifolia and Utricularia sandersonii coming this week. The first is supposed to have nice large leaves which would be a nice look. The second is supposed to be quite an aggressive grower (possibly even invasive) but I’d like to get some good growth going and the possibility of a lot of flowers in the tank sounds really nice.

This set-up has been running for over four months and has had crabs in it for over three. There were initially 8 crabs in there which was probably a few too many, but since they’re kept at the fish store in a purely aquatic tank, I was concerned (rightly) that not all of them would adapt back to the mostly terrestrial environment well. I know I’ve lost at least three of them so far and have only been able to spot four of them at one time recently. You wouldn’t think bright red and purple crabs would be so hard to spot in the tank, but once they retreat to the shadows, they’re almost impossible to spot. I was hoping to keep six so that I’d have the best statistical chance of having a male/female pair but four is good too. They’re generally pretty shy about movement in front of the tank. They’ll either go into hiding or freeze for a long time if you move suddenly in front of the tank. However, if you approach carefully and keep still, you can often observe them climbing around the cups, looking for food. I’m feeding them pellets formulated for crabs and shrimp and those seem to work pretty well. They will also hunt live crickets very successfully. These little guys can really move when they want to. It can be a bit disconcerting sometimes because their movement is a lot like that of jumping spiders. They’re really neat little critters. I’m hoping that they may start breeding eventually, but if they don’t, they’re still neat to watch. 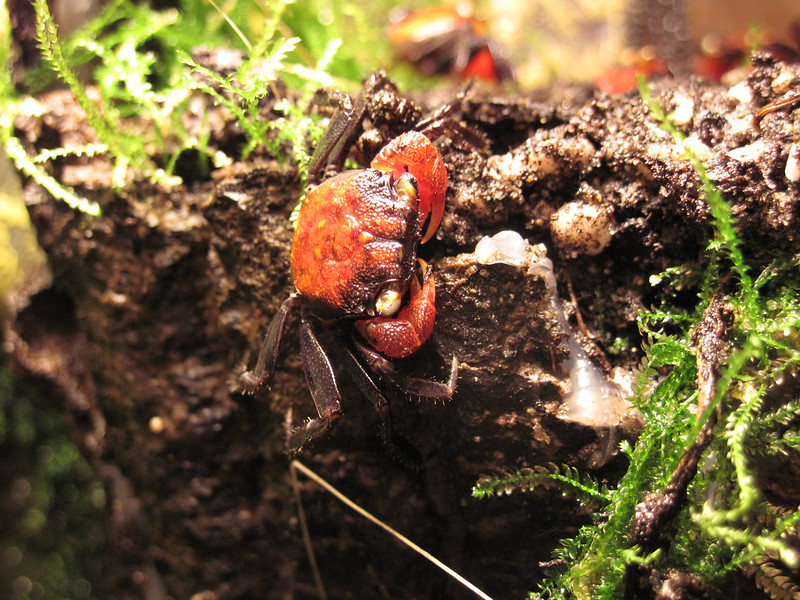 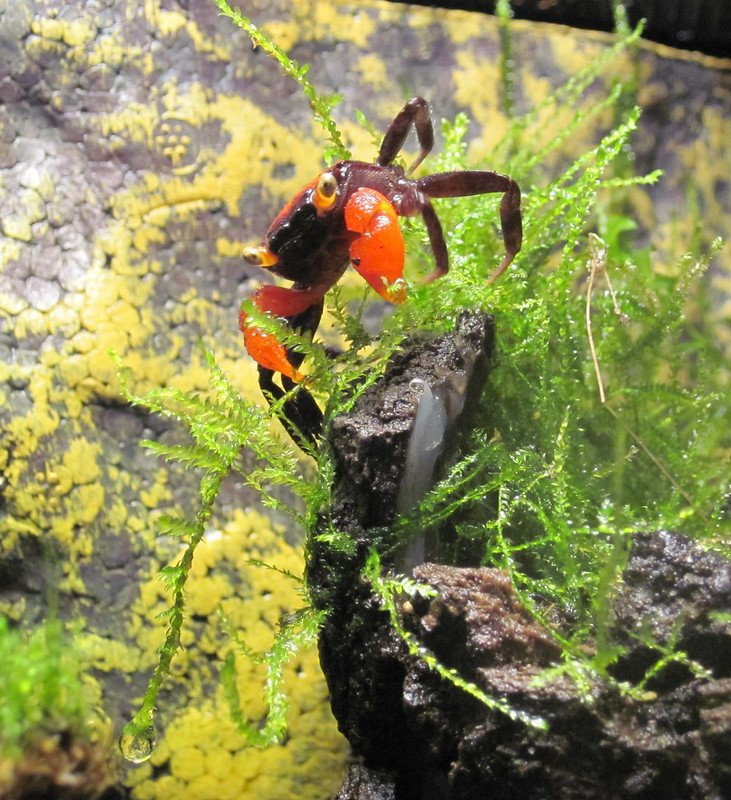