The DC metro area is supposed to get 1-3 inches of snow today. Rural counties were already closing school in anticipation of the snow this morning. The parking lot at the Metro station I ride in from was relatively empty.

It hasn’t even started snowing yet.

Sad thing is that I really can’t mock the area for it any more (which as a former Michigander I used to do) because after almost 8 years of living here, I know how badly the area handles snow. It’s hilly, it’s not plowed well, they don’t salt and no one knows how to drive in it. All I can do is get the hell out of the way of the morons on the road and hope it melts soon and cleanly. One of these days, I’m going to buy this shirt to wear on snowy days. 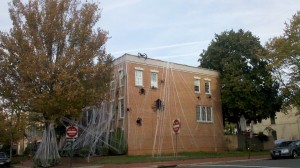 Spiders appear to be taking over this building in Capitol Hill! I think this is my favorite Halloween decoration so far.

EVERYONE DESERVES THEIR OWN ROBOT POSTCARDS.

My husband tends to run across the more interesting crazy people in DC. Mine generally are just scary. He encountered a guy outside of, I think, the Crystal City Metro station that had a whole thing about how everyone deserves their own robot. And honestly, I agree! You could go on long walks with your robot, discuss computer code with your robot, build rockets with your robot. All kinds of things would be possible if we all had our own robots!