My oldest large fish tank is the Battlestar Aquaria. When we moved into our current home, I decided to go with a soil substrate covered in a clay gravel and have pretty much stuck with that for the last 8 or so years. There was a revamp when the tank got broken by flooring installers about 6 years ago, but I just moved everything to a new tank.

My plants grew pretty well, but the clay gravel was proving to be a giant pain in the ass. The reason I got it from a friend was because it was constantly degrading and creating tons and tons of fine silt. Not a huge problem in a heavily planted 125, I thought. However, I’ve had to replace the axle in my Eheim canister filter multiple times – not a cheap or easy prospect since the only way to obtain the part is mail order and it turns out to work best if you replace the rotor at the same time. I finally gave up after the murk killed a Rena canister as well.

Here are before shots. This is murkier than it generally was because after the Rena died I just ran a powerhead until I revamped the tank. No point in killing my rehabbed Eheims again. 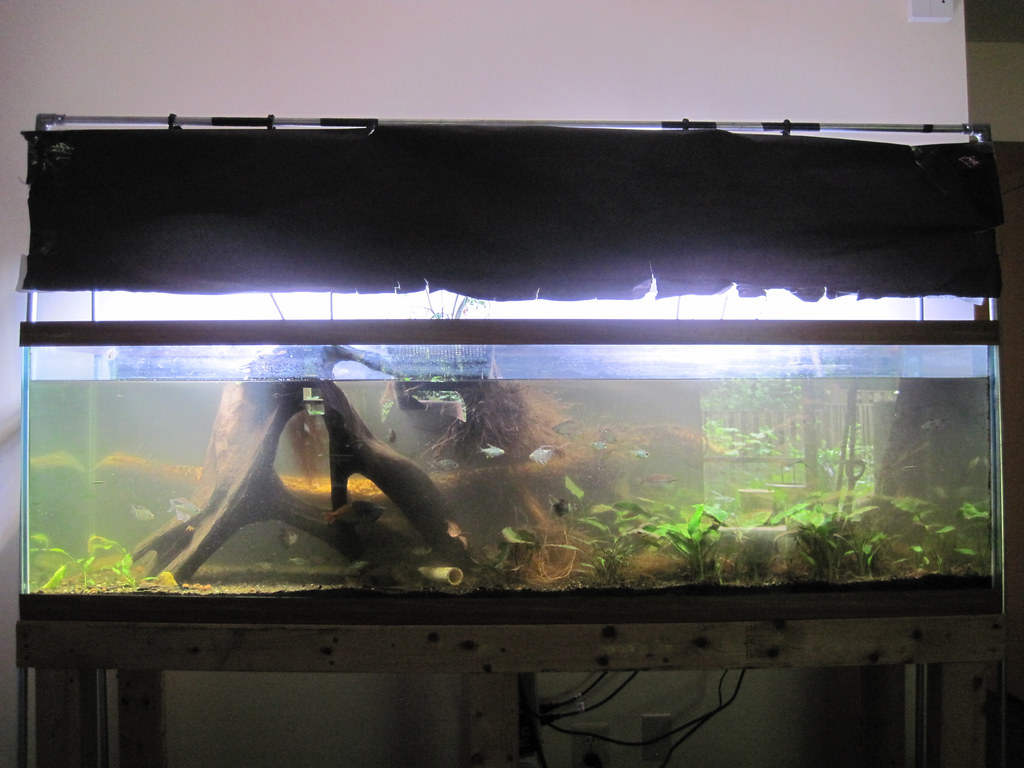 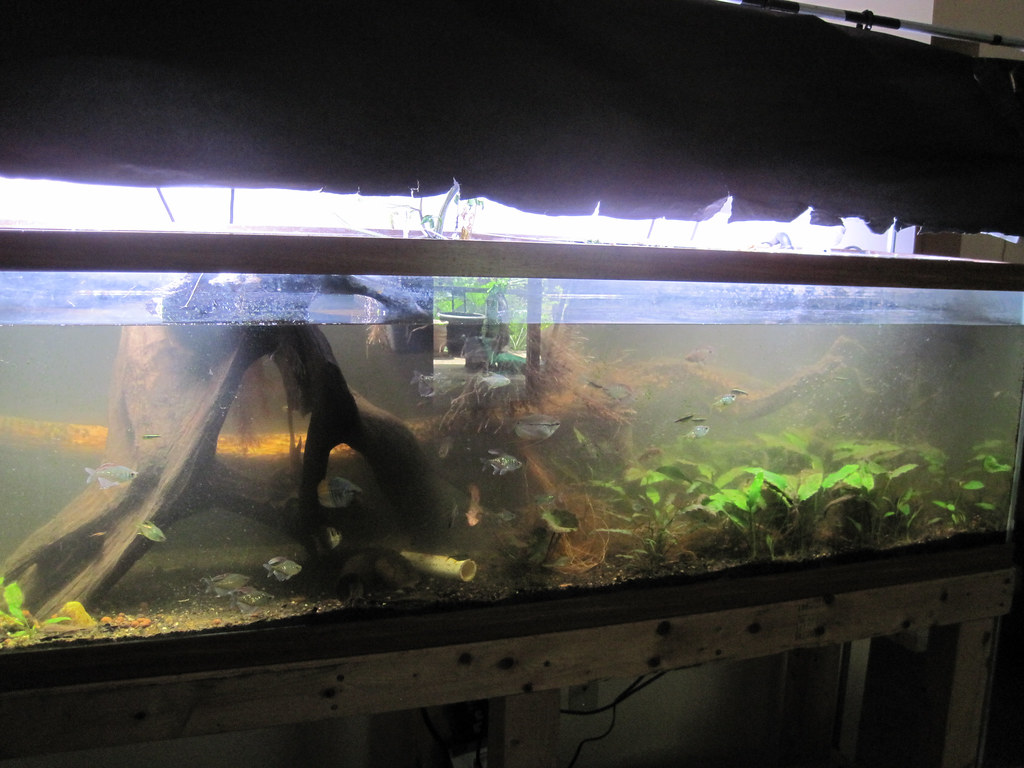 I was also growing watercress and cherry tomatoes as emergent plants out of the top of the tank. Removing the watercress added a lot of silt that the roots had collected back into the water with no filter to draw it out. The cherry tomato had for some reason decided to drop a lot of roots shortly before undertaking this project. I did end up cutting the plant back significantly though, just to make it easier to move.

That big stump in the middle there has been the happy home of yo-yo loaches and bristlenose ancistrus for years. The ancistrus have been removing a lot of wood over that time as well so while it was a giant pain in the ass to pull out of the tank, it was better than it could have been. I also had a better idea of where all the hidey holes in it where compared to last time I had to move it. I did not get stabbed in the finger by a loach’s eye-knives this time.

Moving tanks is a good time to get a fish headcount, especially in a heavily planted tank. I was thrilled to discover I still had a few kuhli loaches left (one brown, one striped) but saddened to realize I only had a grand total of five corydoras catfish left (three bronze, two skunk). I probably won’t fill the cory or loach shoals out because I’m still pretty well stocked on bottom dwelling fish (six or seven bristlenose ancistrus and a bunch of Botia genus loaches) but still a bit sad. The bronze cories are original to the tank when I bought it and probably all over 10 years old.

I knew when I was planning this revamp that I was going for a soil base again, but this time capped with sand. I also wanted to have a bunch of wood to add hiding places and food for the ancistrus. Thankfully I have a creek that runs behind my house through a forest so I was able to find well weathered logs with lots of hidey holes and crevasses easily. So many other fishkeepers get so freaked out by using natural substances, preferring wood that’s been specially baked for aquarium use and shipped from across the world. It seems really wasteful to me if you have access to other sources. I did also make sure to use logs that weren’t in the water itself so that it wasn’t being used by native wildlife. Did displace a few spiders though. :( The soil was cheap garden soil from a local big box store. I had bought it for garden use before so I knew that it was fine soil with a tendency towards being clay-y. This is actually perfect for aquarium use. Too much wood in the soil leads to really tannic conditions. Great if you’re keeping Amazon blackwater fish. Less so if you’re not and actually want to see your fish. Sand I tried to order online. I wanted to get the same stuff I used on the River Tank (which I still need to write up) but I screwed up. Instead of buying 40 lbs of dry sand, I managed to order 40 of wet sand meaning that I ended up with a LOT less actual sand than I intended and a lot harder to spread around. This of course I didn’t discover until I had already gotten 3/4 of the way through my rescape and it lead to frantic late afternoon big box petstore visits. I knew that House of Tropicals, the best fish store in the DC area, had sand, but they closed in an hour from the time of discovery and it takes at least that long to drive there from my house. So I ended up with the only sand I could find, a bright white courser sand instead of a fine golden. I like the finished look overall but I still would have liked a darker color.

So here’s the finished product!

Still a little hazy from the initial set up, but not as bad as it had been. I love the wood pile in the back and the loaches and catfish have been loving it as well. Besides the logs, I also added lengths of capped PVC pipes to act as caves for the bigger fish. The loaches have set up shop in some, the ancistrus in others, and the Striped Raphael catfish (Platydoras armatulus ) in another. I’m glad to finally have a good cave for the Raphael as he’s a nocturnal fish and definitely doesn’t enjoy the high light output from the LEDs. The one nice thing about the white sand is that the PVC blends into it marvelously. It’s harder to spot than it would have been against darker sand.

The plants look a bit sparse because I planted them in the soil level and then added the sand. I thought it might make them less likely to come out of the substrate as the tank filled and also give them some recovery time. A few weeks later and the crypts and swords are all taking off, lots of new leaves coming up. I added some baby tears from the crab terrarium as a foreground plant after this picture was taken. Not sure how it’ll do, but at least it should get enough light. I’m also hoping I can get some java moss and java fern to take root on the logs, but I have really poor luck with it in this tank. Probably the ancistrus don’t help much. I’m sure they knock things about. I also moved the tomato plant to the far right side of the tank instead of the middle. That way it’ll have a lot more room to grow before it shades everything out and less chance for the roots to end up in the filter intake.

All told, I’m pretty happy with this rescape. It did everything I wanted it to in providing new homes for fish, allowing me to better see my fish, and allowing for better aquatic plant growth. I’m probably going to have fewer spawning tetras until the tomato plant roots come back, but I’ll probably have more ancistrus babies. 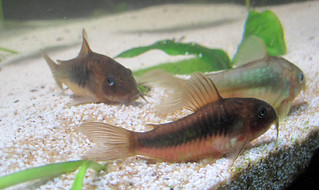 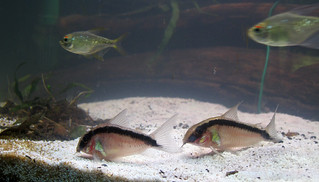 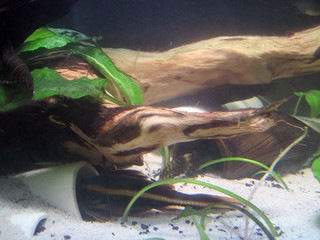 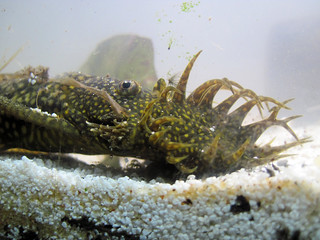 Have any questions about how or why I did something? Let me know! 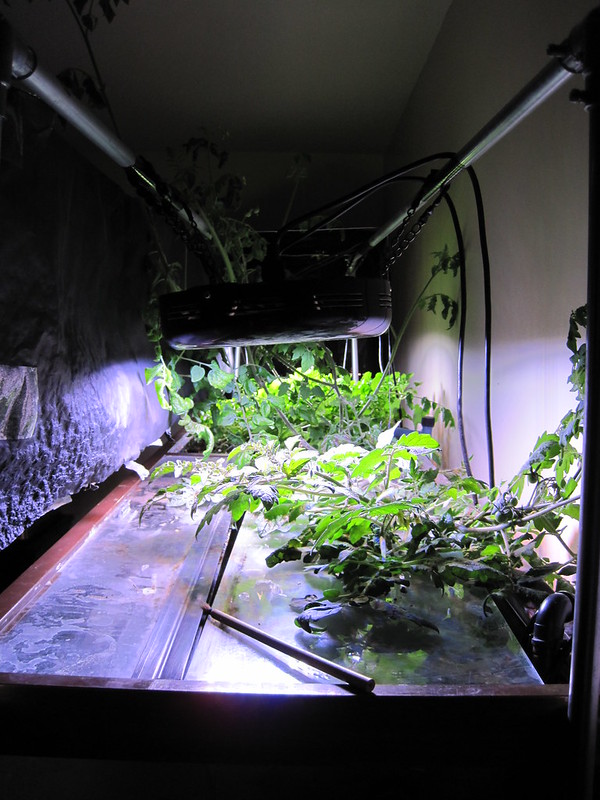 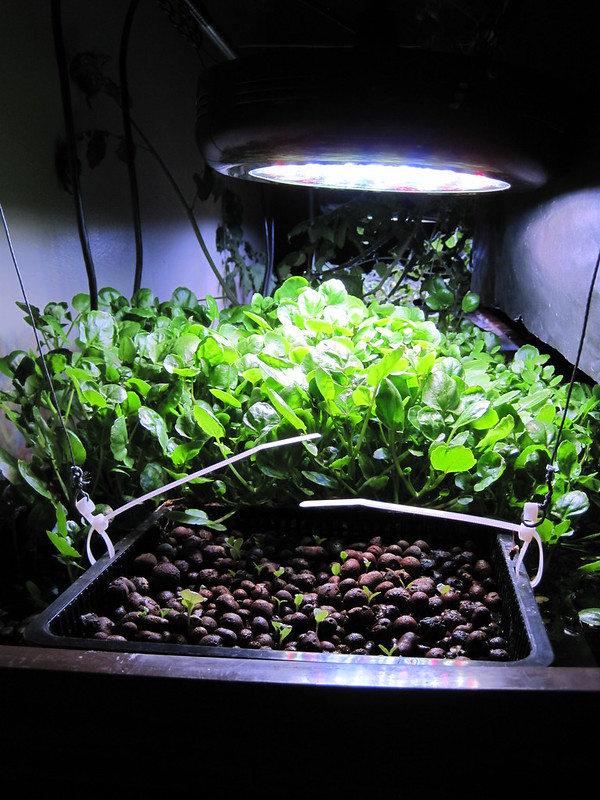 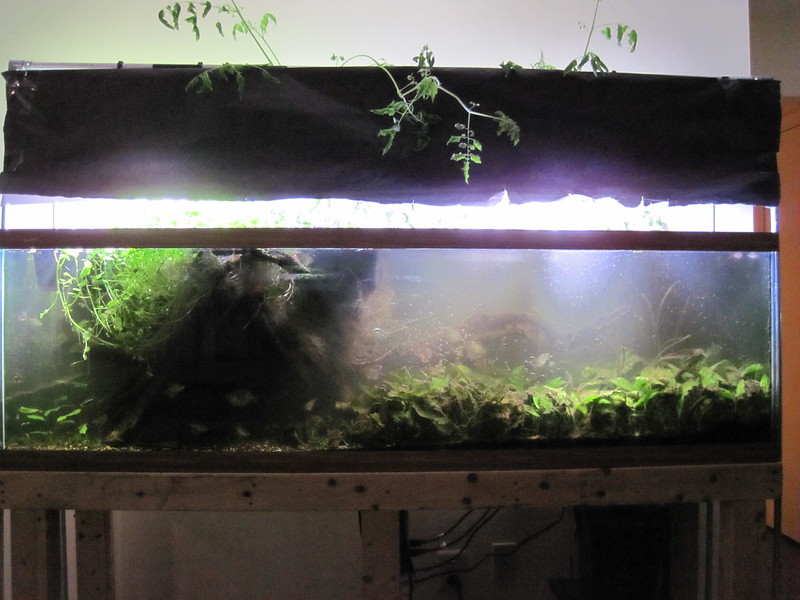 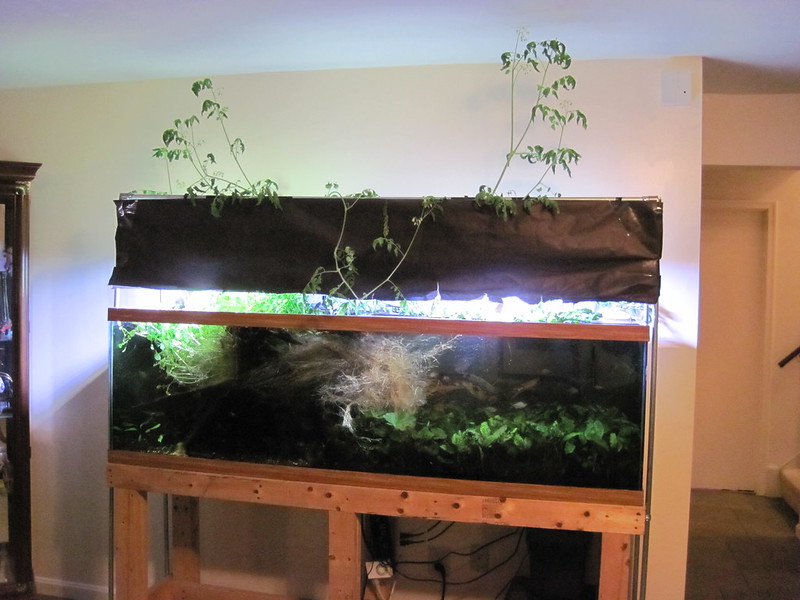 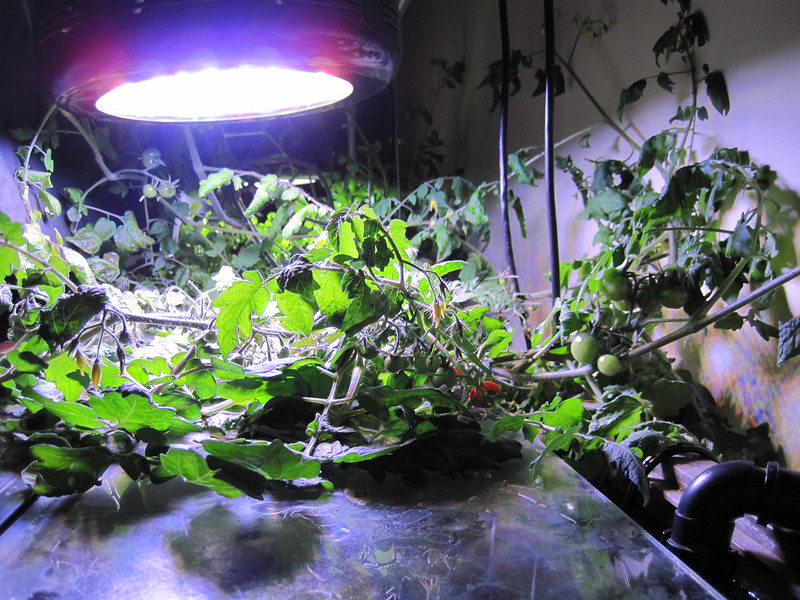 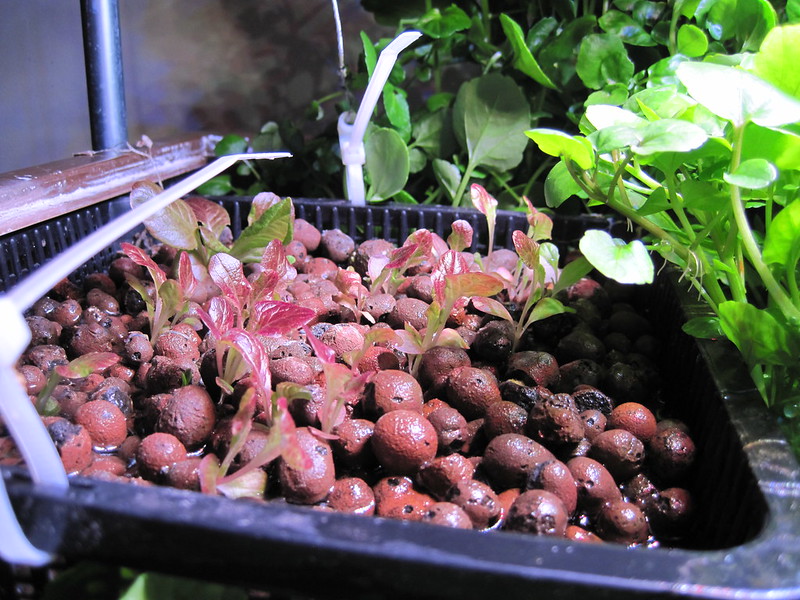