This summer’s garden is ridiculous. It helps that we’ve had a shitton of rain compared to the last few years especially, but I think it might be a bit more than that. 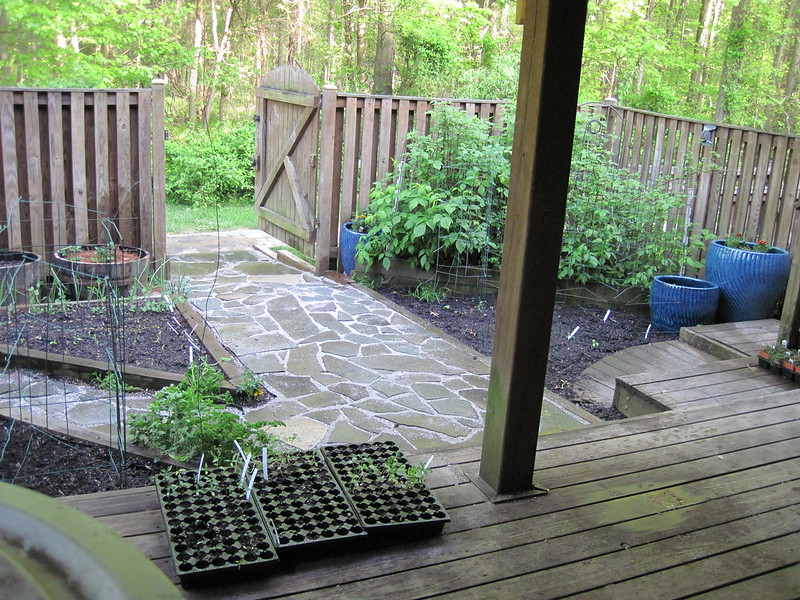 For this year, I kept the two triangle beds on the left but got rid of the raspberries bed on the right. They mostly just shaded out everything until they died back mid-summer and then the squirrels at all the berries anyway. I added the surviving canes to the blackberry patch in the woods out back. I don’t know if they’ll do anything long term, but I hate to just dump still-living plants. After digging out the old, old wood that made up that bed, I filled up everything with new soil. I also acquired a bunch of heirloom apple trees that I’m espaliering against the fence. I think one of them will end up not getting enough sun, but that’s okay. The other major change was rather than using wood scraps and large pots as a way to keep Greta from charging the fence and fence-fighting neighborhood dogs, I actually set up a dog exclusion fence. I picked up a bunch of no-dig fence panels from Lowe’s. They were super easy to install and I really like the look. Early spring garden looked like this: 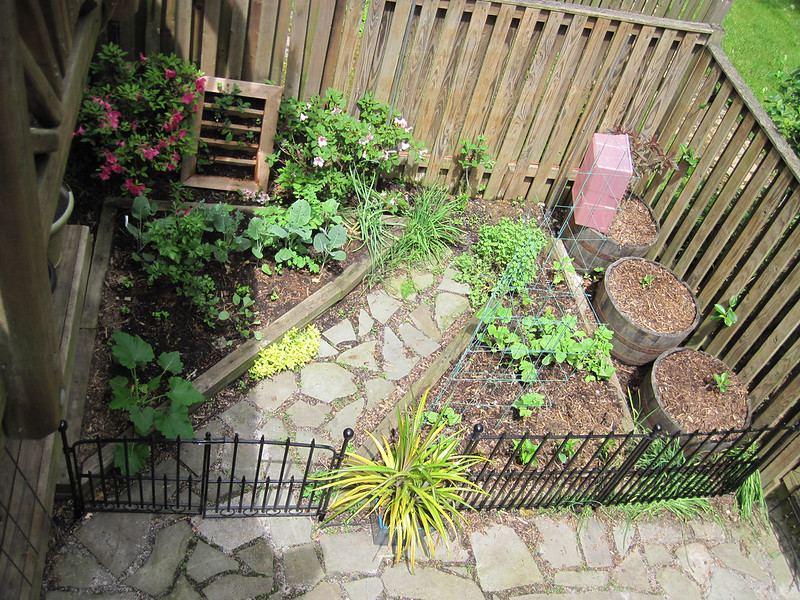 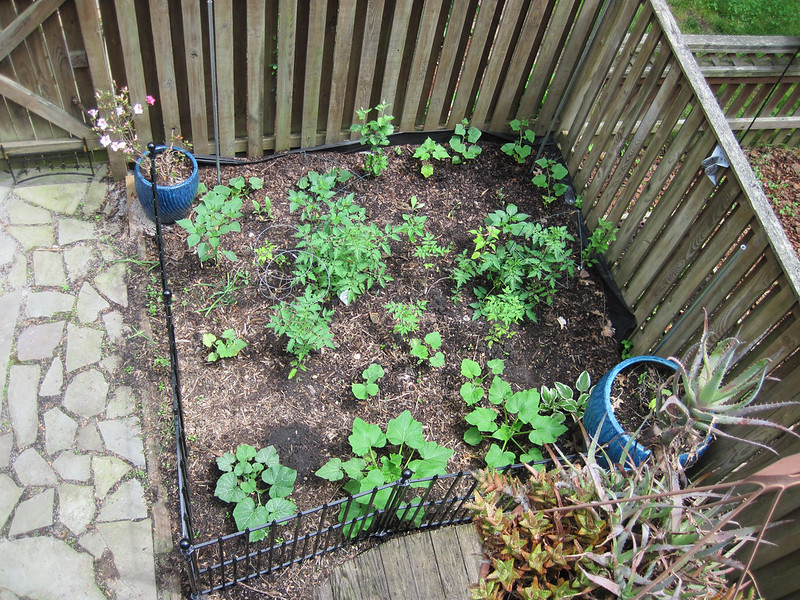 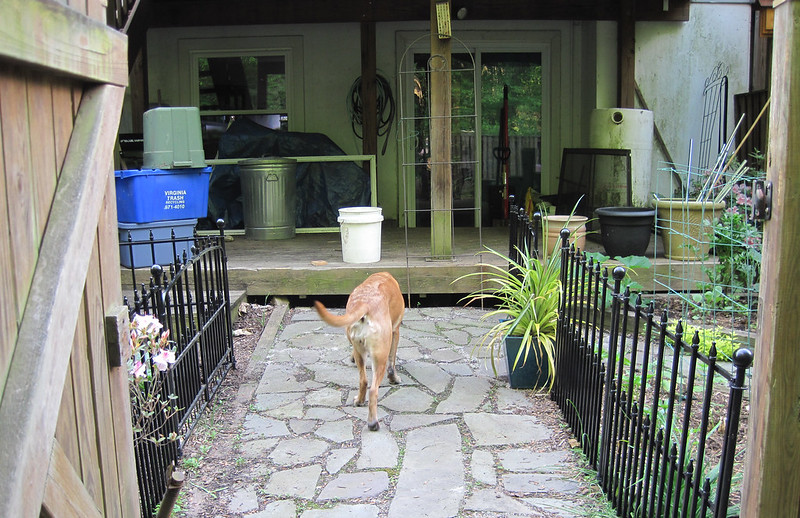 The metal fence panels on the garden left didn’t quite fit the space I needed them to so the opening on this side is filled with a potted pineapple. The leaves on that fucker are pointy as hell and I don’t recommend running into it. So far Greta hasn’t tried it. The fence is also keeping her from jumping up on the whiskey barrel pots that have my heirloom figs in them. They made it through the winter well and are putting out some great growth now. I ran into a similar problem on the garden right and moved the large turquoise pots to fill there. Thankfully those seem to stymie her in this configuration and she hasn’t tried to go over them yet. It helps that the azalea in the one is bigger. Also I’m getting better at getting her to go in the house when I hear people coming. Jerkdogs are fun.

I got my shit together in a serious way this year with seed starting. I had a spreadsheet of what I bought and when to start it and actually followed it! I had really good sprouting success with almost everything I tried. In these early pictures you can see summer squash, zucchini, mini butternut squash, three kinds of cucumbers, celery, basil, tomatoes, tomatillos, and mystery peppers. I kept the seeds from a pepper I really liked and decided to give them a go. No idea what they’re going to turn out like because I’m sure they’re cross-pollinated by like 5 different kinds of pepper. It’ll be an eating adventure.

So those pictures were from mid-May. Here’s mid-June. 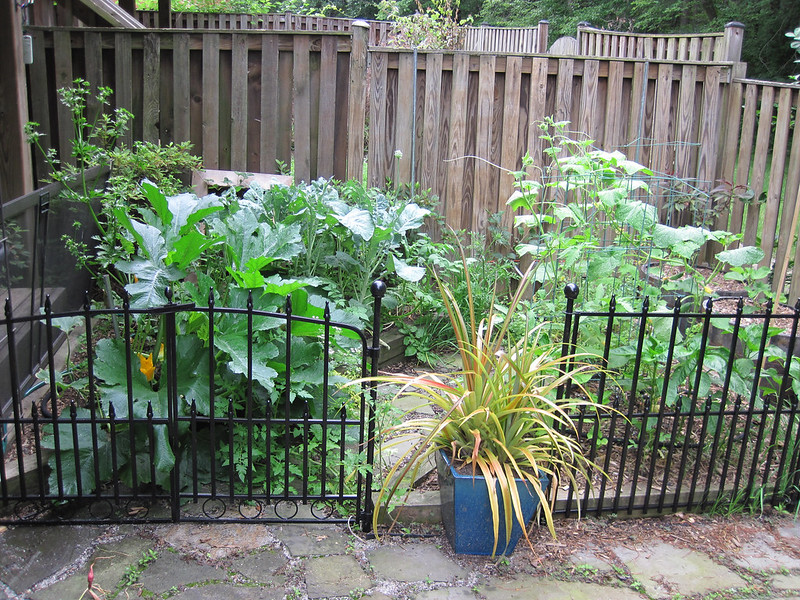 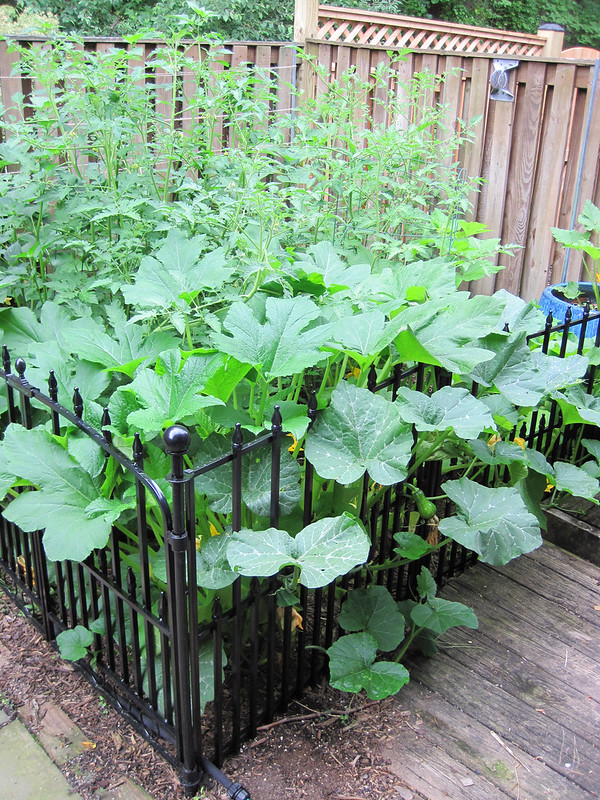 The tomatoes and tomatillos are five feet tall. The squash has grown over and through the metal fencing. The cucumber has grown over its trellis and over and through the wood fencing. I’ve found cucumbers basically embedded between the slats in the fence that can’t be removed. Everything is growing marvelously well. Well, except the artichokes. They’ve done fuck all and I’m okay with that. I didn’t plan on the plants being this huge. I’ve never seen them this huge. I think it’s the combo of rain and new fancy soil. Maybe it was also my awesome compost? It can’t just be the source of more mystery squashes. (so many squashes.) I haven’t even hardly been putting aquarium water in the garden because it’s been raining so much. I did finally figure out a soaker hose system for the different beds using a modular system from Gardeners.com. Super simple to set up and while they say you’re supposed to use it with a hose to get the right amount of pressure, I’m having just fine results using a 55 gal barrel up elevated about 2-3 feet above the garden.

I don’t have pictures of mid July yet but I should take them. Things are going really well. The tomatoes have started getting ripe and the squirrels haven’t quite twigged to them yet. Either they can’t spot them in the giant mass of plants, or don’t realize they’re ripe because they’re not traditional reds. They’re a purple plum tomato and look a bit odd. I’ve pickled many a cucumber into dills and bread & butter pickles. The peppers are just starting to fruit now and I started the pole beans late as I wanted them to start way after the bush beans from the front yard. (so many beans.)

So all told, it’s doing fantastic.

2 thoughts to “This summer’s garden”